I have always said that conservation isn’t just about buildings – memories are precious too. As we get older our memories grow less intense, what we remembered in great detail in the beginning, becomes more hazy as time goes by. That’s probably one of the reasons that I love to take so many photos, to serve as a reminder, so that I don’t forget the detail.

When working on the war memorial, it reminded me of the loss that others had experienced. ‘Lest we Never Forget’ or ‘In Memory’ is often inscribed on war memorials, in fact on the memorial that I designed the words ‘Not Forgotten’ is a phrase that has had a lasting impression on me. Working on the memorial and finding that so many unselfishly gave their lives so that I could have the freedom to enjoy mine, I find incredible.

John McCrae’s poem ‘In Flanders Fields’, has touched those who fought in the war and the generations that followed. The poem describes mass graveyards on the fields of Flanders, fields that were alive with red poppies but then filled with dead soldiers; it highlights the irony of war, where a soldier dies so that a nation of people live. The poppy was chosen as a symbol – it was chosen because the soldiers saw the poppies growing in the battlefields at Flanders Field and they came to represent both loss and hope.

I like a visual prompt, (maybe that’s partly because I’m an architect!) a symbol, something that when I look it, it makes me think something else, and that happens when I look at a poppy. I find the sight of the beautiful poppy flowers uplifts my soul, as well as serving as a grim reminder of war.

On the news the other morning I was watching the story about ‘The Blood Swept Lands and Seas of Red’ exhibition by artist Paul Cummins. Involving 888,246 ceramic poppies planted in the dry moat at the Tower in London, it marks the centenary of World War One. The first ceramic poppy was planted last month, with the final one due to be installed on Armistice Day. I was moved by the mass of red poppies, after I realised that each hand-made poppy represents one British and Colonial death during the conflict, the loss is almost too much to comprehend. 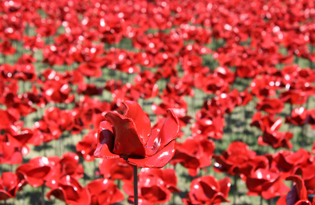 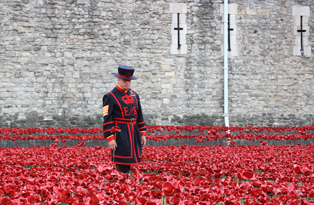 Afterwards the poppies will be sold for £25 each by Historic Royal Palaces, which is hoped to raise an estimated £15m for six armed forces charities. I have ordered mine to serve as a daily reminder of how thankful I am, not just on November 11th, but all year round.

If you have a specific question regarding a project, or would like to talk to us or know more about our ecclesiastic or historic building architect services, we would love to hear from you. You can call soul architects directly on 01909 500 710 or alternatively you can complete our Contact Form